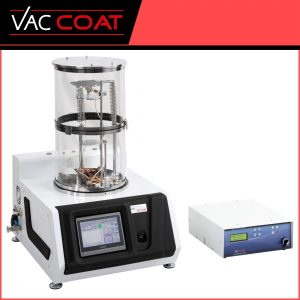 DTT is a desktop, turbomolecular-pumped thermal evaporator for vacuum deposition of thin films. The triple-source evaporation with evaporation source selection system is ideal for deposition of multilayers or alloys.

In high vacuum systems, the most important source of problem in the vacuum process is the gases that are expelled from the surfaces of objects in the vacuum chamber, which is called outgassing.

In order to reduce the incomplete bonds of surface atoms, surfaces are active sites for the adsorption of gases and vapors that are released from the surface when placed in a vacuum. This means that all surfaces, regardless of the type of material, have Outgassing. The four main sources for the outgassing phenomenon are: 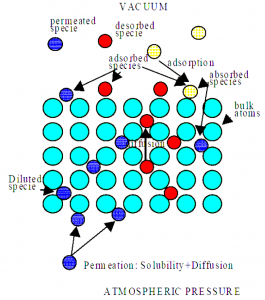 These four processes are shown in Figure 1.

Outgassing rate is the amount of gas released per unit area during per unit time. Therefore, only materials are allowed to be present in a high vacuum environment if their outgassing rate is not more than a permissible limit. Some materials that should never be used in a vacuum environment are: liquids, plastics, elastomers, adhesives, porous ceramics and effects related to living organisms such as hair, nails, skin cells, fingerprints, etc.

Many times users of high vacuum systems confuse outgassing with leakage. In the case of Outgassing, the pressure decreases over time, but in the leakage case, the pressure does not fall below a certain level.

The lower the pressure, the more outgassing occurs. This phenomenon is usually not noticeable at the pressures reached by the rotary pump. Many devices that operate in the very high vacuum range(UHV) use so-called electric heating blankets. In these systems, by heating or so-called baking the system, the heat energy is transferred to the molecules trapped on the inner surfaces of the vacuum chamber and they are separated from the surface faster and transferred to the outside of the vacuum chamber.

As mentioned, the material used in the construction of vacuum systems has a significant effect on reducing the outgassing phenomenon. This point has not been ignored in the production of VacCoat products. The vacuum chamber and its components in the products of this company, which are all vacuum coating systems, are designed and built in such a way as to minimize the amount of outgassing in these systems.

The company’s vacuum coating systems use the physical vapor deposition(PVD) method for the coating. Sputtering, thermal evaporation and pulsed laser deposition(PLD) are the mechanisms used in VacCoat products to create thin films with a thickness of 1 nm to a few micrometers.

Read the following article for more on outgassing topic: