In terms of physics, Sputtering(Sputter Coater) is a phenomenon in which energetic particles of plasma or gas hit the surface of a solid and microscopic particles are separated from it. This phenomenon occurs naturally in outer space and can cause unwanted surface wear in high precision conditions. Creating or removing nanometer layers from materials has many applications in science and industry. Deposition of nanometer layers on optical devices, semiconductors and nanotechnology products or etching of nanometer layers is widely used in the study and application of analytical techniques for a variety of applications.

The energy of sputtered atoms varies widely, and usually the energy of these atoms is more than tens of electron volts. Approximately one percent of the ions that hit the surface of the target material have a ballistic impact and return to the substrate, causing Resputtering. The average number of atoms separated from the surface of the target material by the collision of each ion is called the Sputter Yield.

The sputter yield depends on many factors, such as:

If the structure of the target material is crystalline, the orientation of the crystal axis relative to the surface is also an important factor in the sputtering yield.

One of the applications of sputtering phenomenon is Deposition. Deposition using sputtering is a method of creating thin films of a few nanometers to a few micrometers on the desired substrate. In this process, the atoms separated from the surface of the target material are gaseous. These thermodynamically unstable atoms tend to be on a surface in a vacuum chamber. The atoms on the substrate which form a layer with a few nanometers to a few micrometers thick, called a Thin Film.

In order to deposition process using sputtering, ions need to be fired at the target material in the plasma medium. The gas to be used in the sputtering process must have two properties: first that its atomic weight must be such that it can affect the atom of the target material, and second that it must not enter into a chemical reaction with the target material. According to the mentioned cases, the gases used in the Sputtering Process are from the group of noble gases in the end rows of the periodic table(Argon, Xenon, etc.). Argon gas is the most common gas used in this process.

Gaseous plasma is a dynamic environment in which neutral gas atoms, ions, electrons and photons are in near equilibrium. To feed the plasma and compensate for the energy that is transferred from the plasma to the surrounding area, it is necessary to use an energy source(for example, DC or RF power supply) in order to maintain the plasma. In order to do the sputtering deposition, plasma is formed by injecting a noble gas(usually argon) into the chamber which is vacuumed until a certain pressure(maximum 0.1 Torr) and applying DC or RF voltage(depending on the target material).

The free electrons in the plasma are immediately removed from the negative potential electrode(cathode). These accelerating electrons collide with neutral gas atoms(argon) in their path, causing the electrons in the shell of these atoms to separate. As a result, the gas atoms become positive ions and accelerate towards the cathode, causing the sputtering phenomenon. In plasma, some free electrons find their way back to the last electron layer of gas ions and return the gas atoms to their ground state. The return of the atom from the high energy level to the ground state leads to the release of energy in the form of photons, and these photons are the reason for the glowing of the plasma. This mechanism is called Diode Sputtering. One of the problems with this method is that its coating rate is low and it takes longer to do the coating, which causes the target to heat up and damage its atomic structure.

With the advent of magnetron sputtering method, the problems for diode sputtering were solved. By placing a number of magnets behind the cathode, the free electrons are trapped in the magnetic field of these magnets just near the target surface. These electrons do not reach the substrate like the diode sputtering method and do not bombard the substrate surface. The movement of these electrons in the path of the curve led by the magnetic field increases the probability of ionization of the neutral gas atoms many times over. Increasing the ions that hit the surface of the target increases the rate of deposition.

If the deposition process is performed from several cathodes, the Confocal Sputtering Technique can be used. In this technique, the cathodes are arranged in a circular pattern with a focal point. By placing the substrate that rotates around its axis at or around the cathodes focal point, a layer is deposited that has a much better uniformity than the layer deposited using a cathode. Also if it is necessary to perform the deposition of several different materials(Simultaneously for alloying(co-sputtering) or asynchronous to create multi-layers), this technique is effective. Using this technique, a uniform layer can be obtained on a substrate with a diameter twice the diameter of the target. Also, for materials that have low sputtering yield, the deposition can be applied using several cathodes simultaneously at a higher speed. The triple cathode, sputter coating manufactured by VacCoat Ltd. in DST3-A and DST3-TA models, due to being equipped with three angled and focal cathodes, are able to perform confocal sputtering.

Deposition of the Highly Reactive Materials 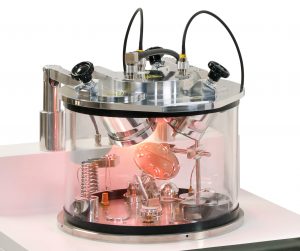 In this type of sputtering, the atoms separated from the target undergo a chemical reaction before being deposited on the substrate. The resulting deposited thin film will have a different composition than the target material composition. Chemical reaction occurs between atoms separated from the target and reactive gases(such as oxygen or nitrogen) that enter the vacuum chamber during the deposition process. By adjusting the amount of inlet gases and noble gas(argon) used in this process, a thin film with the desired composition and stoichiometry can be deposited. In various models of VacCoat Ltd. products such as DST1, DST3 and DSCR(SEM Coater), one or more inlets are installed to allow enter the reactive gases such as oxygen to the vacuum chamber during the deposition process.

The DSR1 is a Scanning Electron Microscope(SEM) sample preparation system equipped with a rotary pump to achieve vacuum less than 50 mTorr which is a suitable vacuum range for noble metals sputter coating. 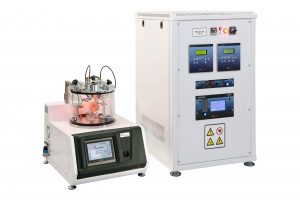 HIPIMS is a new Magnetron Sputtering Method that uses high power pulses to increase target ionization. Compared to conventional magnetron sputtering, this method ionized atoms reach the substrate with more energy, which increases the density and quality of the deposited thin film.

Various models of Vacuum Coating Systems manufactured by the VacCoat Ltd. perform sputtering deposition process. These devices are classified into different models depending on the ultimate pressure they can reach, the power supply used in them for the sputtering process, the number of cathodes, the dimensions of the vacuum chamber, and etc. For more information about the products of VacCoat Ltd., refer to our site. 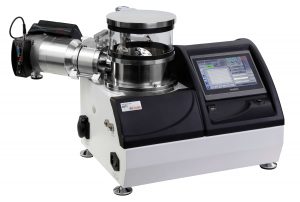