The grids used in TEM microscopes (a type of electron microscope) to place specimens are usually made of copper with a mesh size of about 3 mm and a layer of plastic called a formvar and a thin film of carbon. 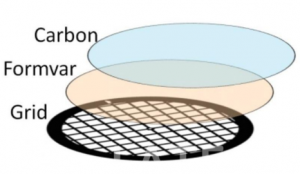 When the samples are placed on the coated grids, the uniformity of the sample layer is one of the important points for proper imaging of biomolecular complex in aqueous solution. For this purpose, it is necessary that the surface in contact with the biological sample, in addition to being hydrophilic, is completely free of contamination. The layer commonly considered as supporting layer is a few nanometer thin film of amorphous carbon. This thin film absorbs the particles across the holes in the grids used in TEM imaging and minimizes the effect of the support in TEM images. Unfortunately, the grids used in TEM are hydrophobic after carbon coating. This causes the orientation and concentration of the particles in different holes of grid to be different and the sample not to be uniformly placed on the supporting grid. As a result, the surface needs to be treated before placing the combination of biomolecules and water to spread the sample with minimum thickness on it.

Hydrophilicity and hydrophobicity of a surface means how water interacts with that surface. If water beads up into droplets and does not spread evenly across the surface, is hydrophobic. On hydrophobic surfaces, the contact angle of water droplets with the surface is large. In contrast, if a drop of water that is placed on the surface is evenly distributed and has a small contact angle with the surface; it is called a hydrophilic surface. The usual way to increase the hydrophilicity of the TEM grids is to place them in a low power oxygen or argon plasma environment.

Oxygen plasma reacts chemically with and destroys hydrocarbons and surface contaminants and removes them. Oxygen also enters into a chemical reaction with the surface, allowing the adsorption of functional groups that alter the surface properties. In addition, these functional groups can be modified by oxygen plasma. In most cases, surface hydrophilicity increases due to the presence of hydrophilic groups such as hydroxyl(OH), carboxyl(COOH) and carbonyl(CO) on the surface. However, argon plasma does not react chemically with the surface and, depending on the plasma energy, removes surface contaminants and increases the surface roughness.