Surface modification with low-surface-energy materials is a typical technique to control over the hydrophilicity of solids. For example, using nano-structured polymers, surfaces with a high degree of hydrophobicity are produced. Carbon is one of the materials that has been considered in the microelectronics industry due to its environmental friendliness and good economic efficiency. Both the carbon thin film deposited by evaporation from a carbon fiber or rod, and the carbon thin film deposited by sputtering from a graphite target, is amorphous.

Amorphous carbon layer has hydrophobic properties that can be increased or decreased by different methods according to the intended application. One of the applications of the carbon thin is use in the preparation of Transmission Electron Microscope(TEM) grids. In this case, the hydrophobicity of the carbon layer needs to be converted to hydrophilicity. Plasma is used for this purpose. In most cases, surface hydrophilicity increases due to the presence of hydrophilic groups such as hydroxyl(OH), carboxyl(COOH) and carbonyl(CO) on the surface. 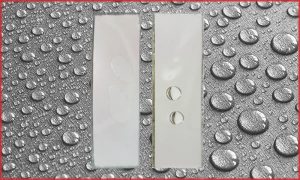 Devices used to prepare TEM grids usually, in addition to the possibility of carbon deposition, also allow the use of plasma to increase the hydrophilicity of the deposited carbon thin film. A number of different models of VacCoat Ltd. devices allow the user to coat carbon thin film, such as the DSCR, DSCT, DCR, and DCT models. In the new versions of these models, the Plasma Cleaner feature is to be added to complete the efficiency of these models in the process of preparing TEM grids.

In addition, using Plasma Cleaner before applying the deposition improves the quality of the deposited layer and increases its adhesion to the substrate. The design and manufacture of Plasma Cleaner has been done on the mentioned models and the initial tests show a satisfactory result. It should be noted that the DST1-300, DST3 and DST3-T models were previously equipped with Plasma Cleaner and have been used by many users. For more information about the devices manufactured by VacCoat Ltd., refer to the internet address.