Pyrolytic graphite is a polycrystalline form of graphite that is deposited from the vapor phase by thermal decomposition of a simple hydrocarbon such as methane. Pyrolytic graphite is a man-made material similar to graphite, except that there are covalent bonds between its graphene layers. Graphite has a layered structure, and each carbon atom in each layer is bonded to three adjacent atoms. The atomic structure of graphite is a two-dimensional lattice of hexagons whose first and third layers exactly match each other, while the second layer is slightly displaced relative to these two layers.

But the material deposited as pyrolytic graphite consists of layers of wavy, twisted plans composed of carbon atoms arranged in a hexagonal structure. These layers are mutually parallel to each other but rotated randomly around an axis perpendicular to the deposition plan(c axis). The layered structure, with strong intra-layer covalent bonds and weak electrostatic bonds(Van der Waals bonding) between the layers, leads to a high degree of anisotropy in all properties. It is inherently brittle at room temperature.

Due to the structural differences between pyrolytic graphite and conventional commercial graphite, different properties should be expected from this material. Thermal and electrical properties:

From a mechanical point of view, the ultimate strength of pyrolytic graphite in stress, bending and compression increases significantly with increasing temperature. And magnetically, this material is a great diamagnetic material at room temperature(X = -4 × 10-4). Magnetic Levitation is a phenomenon that can be implemented using materials with high diamagnetic properties. This material is a suitable option for magnetic levitation due to its high diamagnetic properties.

Applications of pyrolytic graphite include the following:

During the vacuum process, the gas atoms absorbed by the chamber wall are slowly released from the surface of the chamber wall(Outgassing phenomenon), and if the chamber is not baked, it will literally take months to reach UHV conditions. 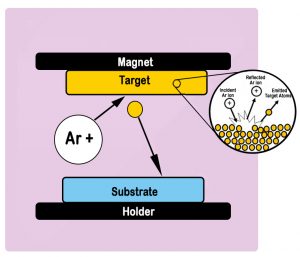 A basic sputtering process, the cathode plate is bombarded by highly energetic positive Ar ions and generates plasma. The bombardment results removal of target atoms(sputtering), and deposition of them on the substrate and making the thin film.

To create thin films of pyrolytic graphite, vacuum deposition systems made by VacCoat Ltd. can be used in different models that are able to do deposition by sputtering method. Products of VacCoat Ltd. that are able to perform sputtering are divided into different models according to the number of cathodes, type of power supply, chamber dimensions and ultimate vacuum. DST3, DST1-300, DSCT, DST3-T models are among the products that can deposit different materials by sputtering method. For more information about the products of this company, refer to the site.