Sputtering is in fact the process of transferring the momentum of the particles(usually the ions of neutral gases) to the surface of the target. Parameters such as energy, angles and masses of the incident particles, as well as the binding energy between atoms, affect its efficiency. The contacting ions with the target surface are either absorbed by or reflected. As the energy increases, ions penetrate into the target material atomic network and begin to degrade the surface. When the amount of energy reaches the threshold, the atoms begin to drop off the surface.

The minimum energy required to throw an atom from the target material’s surface is the amount of energy that it refers to as primary energy. Usually, the initial energy value is about 3 to 4 times greater than the binding energy between the surface target atoms.

By creating the potential difference between the cathode(where the target material is placed) and the anode(which is actually the wall of the chamber and the substrate attached to the electrically ground), the neutral gas in the chamber(i.e. argon) is ionized and the plasma is ignited.

The generated ions accelerate towards the cathode, which is located at a negative potential. If the energy transferred from the incident ions to the surface of the target material(which is located in the cathode) is greater than the initial energy, the removed atoms collide with other atoms and the energy is cascaded. The atoms removed from the material’s surface after a few collisions, reach the substrate with their remaining energy.

If the sputtering process uses a magnetic field to control the motion of the electrons, then it is called Magnetron Spattering. This field is created by magnets with different shape and sizes placed behind the cathode. By this magnetic field, secondary electrons can be trapped near the surface of the target material which causes ionization of argon atoms prior to re-absorption. This causes the formation of plasma at lower pressures and plasma stability.

Magnetron sputtering devices use a bipolar structure to trap electrons around the cathode. Bipolar not only allow for low discharge(less than 10-2 mbar) of, but also improve the rate of excitation and ionization. This dipole is created using rows of permanent magnets. The placement of magnets is such that the S-N-S or N-S-N combinations are formed and the central magnetism(internal) has the opposite polarity of the two other rows. Usually, external magnets are mounted on iron rings. If all the magnets have the same power, all the field lines out of the external magnets pass through the central magnet. This configuration, called Balanced Magnetron Sputtering which in that the electrons cannot escape from the magnetic field, and as a result, the plasma remains only around the cathode.

On the other hand, if only the center magnets are week, all the magnetic field lines will not be caught up by center magnet and the shape of the resultant magnetic field will change allowing some of the electrons from plasma to escape easily towards the substrate, and this condition of magnetron arrangement is called Unbalanced Magnetron Sputtering. The presence of electrons around the substrate leads to the ionization of neutral gas atoms and the penetration of plasma into this region. High-energy ions bombarded the substrate, which increases the quality of the growing thin film.

Tin dioxide(SnO2), has received significant attention due to its potential utility in various practical applications such as conductive electrodes and transparent coatings, heterojunction solar cells, optoelectronic devices, gas sensors, and thin film transistors, etc. Since the characteristics of the thin films depend on the conditions of the deposition and deposition methods, a lot of studies have been done on the deposition of the material, so that it can be used optimally. Studies of this research group have been done on a thin film of tin dioxide deposited on a silicon substrate using an unbalanced RF Magnetron Sputtering method.

According to the results of these studies, the crystallographic structure of the deposited thin film tend to have random orientation with intense (110), (101), (211) peaks and a very low intensity (200) and (111) peaks. As the power increased to 200W the films showed a dominant (101) orientation in comparison to other peaks, indicating that it is possible to obtain highly oriented SnO2 thin films simply by tailoring the applied RF power. 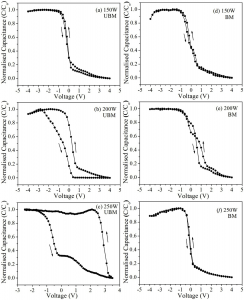 The overall observed C-V behavior in both UBM and BM sputtering can be attributed to the formation/curing of different traps in the growing films during the physical bombardment of growing film by energetic. To find out more about the results of this research, see the link.